Word on the Street: Tess Ward 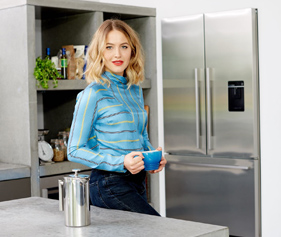 In this series, ‘Word on the Street‘, we share an insider’s view on the King’s Road. Musicians and models, politician’s and hall-of-famers from all walks of life have trod this road and we hope that the each individual’s insight will surprise, inspire and delight so that you too, can become part of the King’s Road story.

In this latest edition, Tess Ward, Le Cordon Bleu trained chef, author, blogger and “golden girl” of the kitchen, reveals how to dine like a King (or Queen) on the King’s Road.

“I’ve always found London to be a city where eaters remain local to their postcode like few others. Barcelona, Milan, even New York – people travel for good food. From Manhattan, it’s quite the norm to hop on the train to Bushwick for pizza; across the park for modern California; moped across Milan into the Cinque Vie for some of the best arancini. If ever there was a time to mark the shift its been with the ease of lockdown and the opportunity to satisfy some long overdue cravings. After a year of being locked in, locked up, lock and loaded to our own houses, post this (hopefully final) wave of the pandemic that tested the sanity and bank flexibility of every establishment in hospitality, I am eagerly keen to eat something not cooked by me or that doesn’t come with a plastic lid. It’s been so long that I’m a little unsure how I will fare maintaining a continuous conversation that doesn’t slip into a habitual narrating thought stream of babble, or dropping food all over myself – but with the promise of chef-finessed food, that won’t stop me. And, I’ll be starting with some of my nostalgic Chelsea favourites.

Like few other central London neighbourhoods, such as Soho or Marylebone, Chelsea has guarded and curated the shops on and around the King’s Road with precision and care. The Duke of York Square facelift brought a smattering of new offerings, which added to the collection of destination restaurants to far more than London high streets, and contributed to the modern feel of the area. Restaurants have popped up and stayed, michelin-stars have been won, institutions have remained and cracker smatters of cafes come and gone. It remains, however, home to my favourites, with something for every craving, day or occasion.

It’s been a long way, and a painful wait for the hospitality industry to reopen for the regathered herds to coexist in a shared space again. Getting back into the dining seat is, as I see it, my absolute civic duty – fortunately, it’s a very enjoyable one at that.

Elevated family-owned restaurants are a dime a dozen in a city like London. After the success of their Notting Hill venture, the Shed – aptly named as it sits off the street in a charming, ivy-vine brick house merged with rustic barn. The Gladwin brothers trio (a farmer, chef and restauranteur) went on to bring their farm to table offering to the King’s Road. Rabbit is their second restaurant – a little more upmarket and a little more interior design heavy, embodying their characteristic ramshackle style with obscure driftwood wall coverings in a highly packed, intimate setting. The menu features seasonal small plates, daily changing cocktail and Nutbourne wine from their own vineyards. In the summer, you can expect explosions of flavour, colour and beautifully choreographed food with their mushroom marmite eclair and egg confit; monkfish crude with chilli and lemon verbena and smoked trout with sea kale and caviar sauce.

For nearly two years, Medlar was one of my closest locals. It may have been its sobering dark entrance or white starched linen, but I always considered it a little too michelin star, old-school for my taste. It called for a ‘you need to take me seriously’ meal, with a parent unconvinced by my life choices, to get in the door. Naturally I regretted waiting as long as I had the second I had buttery puff pastry with a duck egg, red wine reduced duck heart, lardons and turnip puree in my mouth. This was the first of three times I went to the restaurant that month. To give you a better idea of their offering, the continental European restaurant, like the more inclusive high-end restaurants, has a modestly priced menu (£39.50 for three courses at lunch), and to wet your appetite, currently boasts a rather intriguing pair of starters – sea trout crudo with an oyster beignet and a cockle vinaigrette, and a foie gras and smoked eel terrine with crisp chicken skin, damson and toasted brioche. Not to mention the aforementioned duck egg tart.

Never has such an abstract combination of yakitori-style skewered foods and nigiri sounded like such a good idea that it does on the menu of Danish/Japanese fusion, Sticks’n’Sushi. Founded by two brothers, its success in Denmark clearly transcended the leap over the pond as Londoners have progressively excelled the sushi-fusion style of the London scene. Like many restaurants, Covid required a rapid transition into takeaway, but their fresh and fun take on food made restaurant dining feel reachable – even at home with fun menus curated by their chefs with names like ‘vegan greenkeeper’ and ‘mixed emotion’ – to which we can all relate. Now that London has opened back up, the chance for grill-hot Wagu Yaki and Tori Katsu sticks, delicate sashimi and creative black cod maki and ebi panko, not to mention buzzy, late night, date night appropriate interior (the King’s Road restaurant is in a properly glammed up former pub) is enough to get me over ordering on the hot sake and getting my fix of mouth-explosions with hot wasabi.

With its unapologetic ‘eat as its ready’ service, this charming Venetian-inspired baccaria eatery first emerged in Soho under the know of restauranteur Russell Norman and up-and-coming chef Florence Knight. It didn’t take long before its fresh, no reservations available, take on Italian food that made pasta feel somewhat obsolete in a been there, done that way, developed a true legion of regulars. So much so that within several years a cookbook and newer iterations emerged. One of which on Duke of York Square – the one and only that offers a Covid-summer appropriate al fresco experience. As far as menus go, any establishments that limit their aperitif options to the classics clearly know how to mix a good negroni, which I can absolutely attest to. Other favourites for me remain their butter soft fennel flecked meatballs in a rich tomato sauce, wafer thin courgette, basil and parmesan salad and mini pizzettes – particularly the potato and robiola (a type of soft white Italin cheese) – and if space, their strong and boozy tiramisu.

Tucked away on a side street, it bookmarks the final stretch of shop fronts at the World’s End kink in the King’s Road, marking it the farthest point where lululemon seamless and oversized shirts are the default uniform. In case you didn’t read the name, this is mama’s authentic Italian cooking. There are few places in the city that can get away without pricing their menus and that is historic establishments. Its forgivable because their spaghetti vongole is priceless – well, nearly. They also have a truly authentic pici alla carbonara, and these are only the pasta. The rest of the menu is expansive, possibly a little too much on the fish options (I’m always sceptical when seafood options aren’t seasonal) but I’d gladly hedge my bets on a pan-fried butter-glazed calves liver with safe, or tagliata di manzo. It’s the sort of place to sink a few glasses of wine and commit to the best pasta-induced carbocide – less we forget that holiday to Italy might not be happening this year.

Ever since the original iteration by Terrence Conran in the 90s. the Bluebird has been an iconic space for people watching, drinking, eating and sun-basking. The two floors of the former garage, with high ceilings and vast windows, boasts not only a restaurant and cafe, but bakery also. Stylistically the interiors bridge from diner leather to art deco, with pops of primary colours between wooden tables, a nice smattering of indoor foliage bringing me oxygen into the space. The menu offering falls under the ubiquitous ‘modern British’, but with a black sesame prawn tempura, poke bowl style twist. Its lobster pasta decadence and brunch menu of praline pancakes with smoked streaky bacon and maple syrup certainly invites languid daytime eating catch-ups, followed by tea or wine – all the better if the summer weather pulls through and you can sit outside.